If you find that your car won’t start, and after you jump start it the car immediately dies when removed from the jump source (jump box or another car), then you probably need a new alternator. Your alternator isn’t providing enough power to run the car and charge the battery. This guide will follow a 2004 Honda Accord V6. The process will be very similar for most cars, especially other Hondas but the bolt sizes and locations will vary. 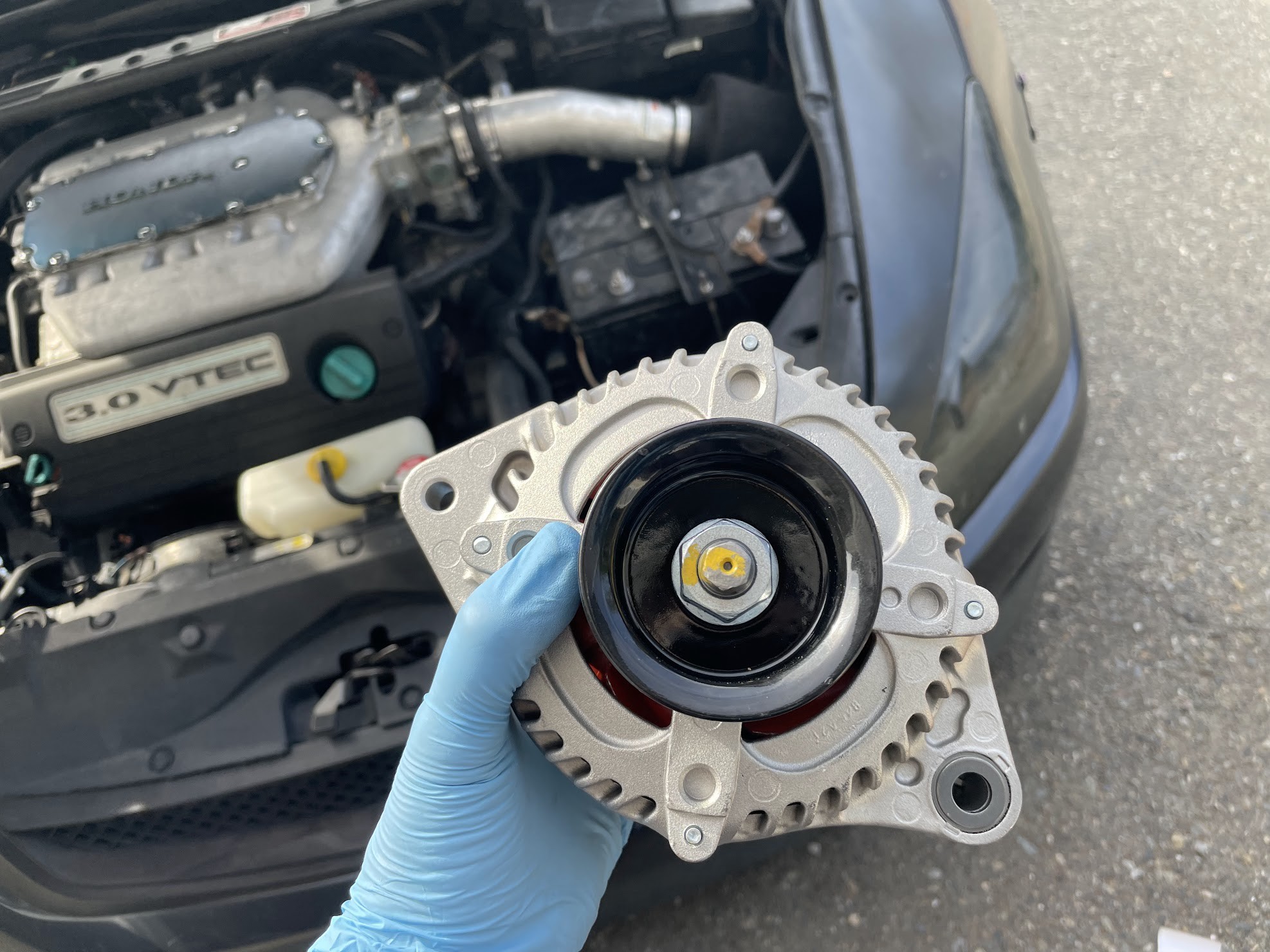 This job only requires very basic tools like wrenches and sockets. A breaker bar is a big plus (if you don’t have one you can extend your ratchet handle with a jack handle). A multimeter is handy to test your charging system afterwards but isn’t required. 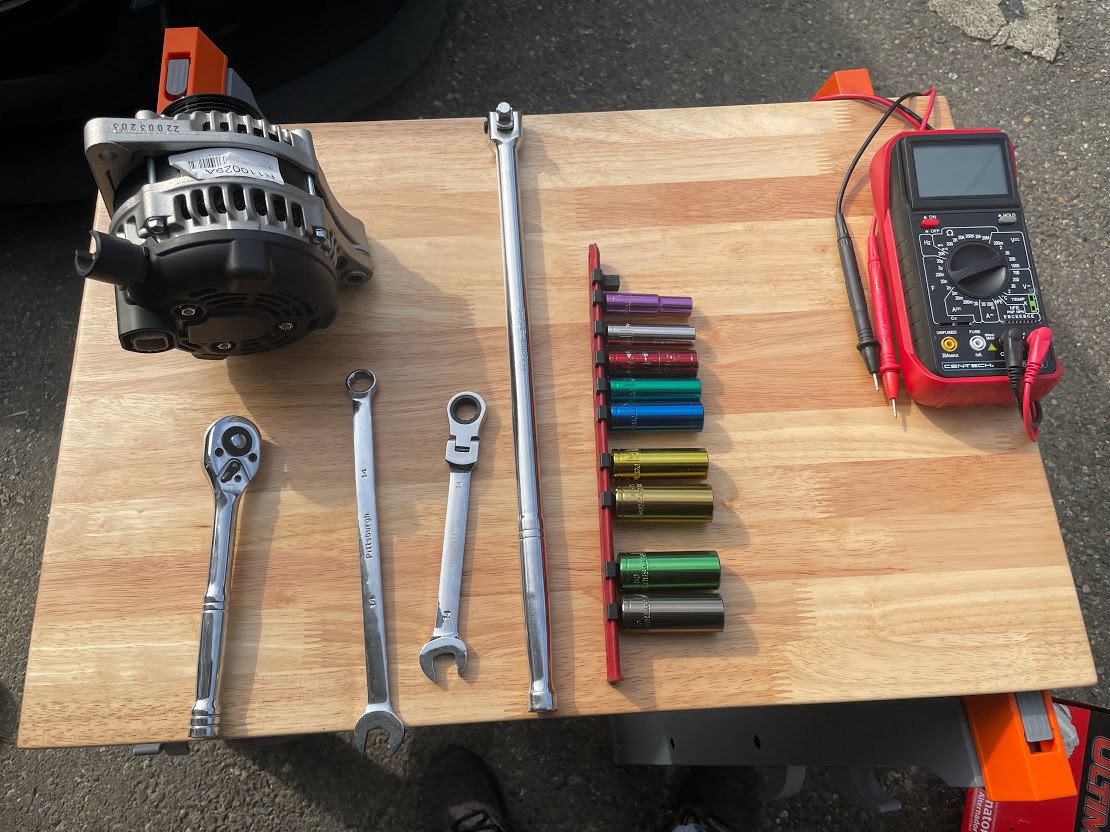 The output wire on the alternator is connected to the battery and is always hot, so before you start removing the alternator disconnect a terminal on your battery. In every Honda I’ve worked on this is 10mm nut.

Now let’s locate the alternator. On cars of this era with a J-Series V6 (Accord, Odyssey, Passport, etc) the alternator is on the front of the engine on the passenger side. All alternators are located along the engine’s pulley/belt system so they are easy to find. 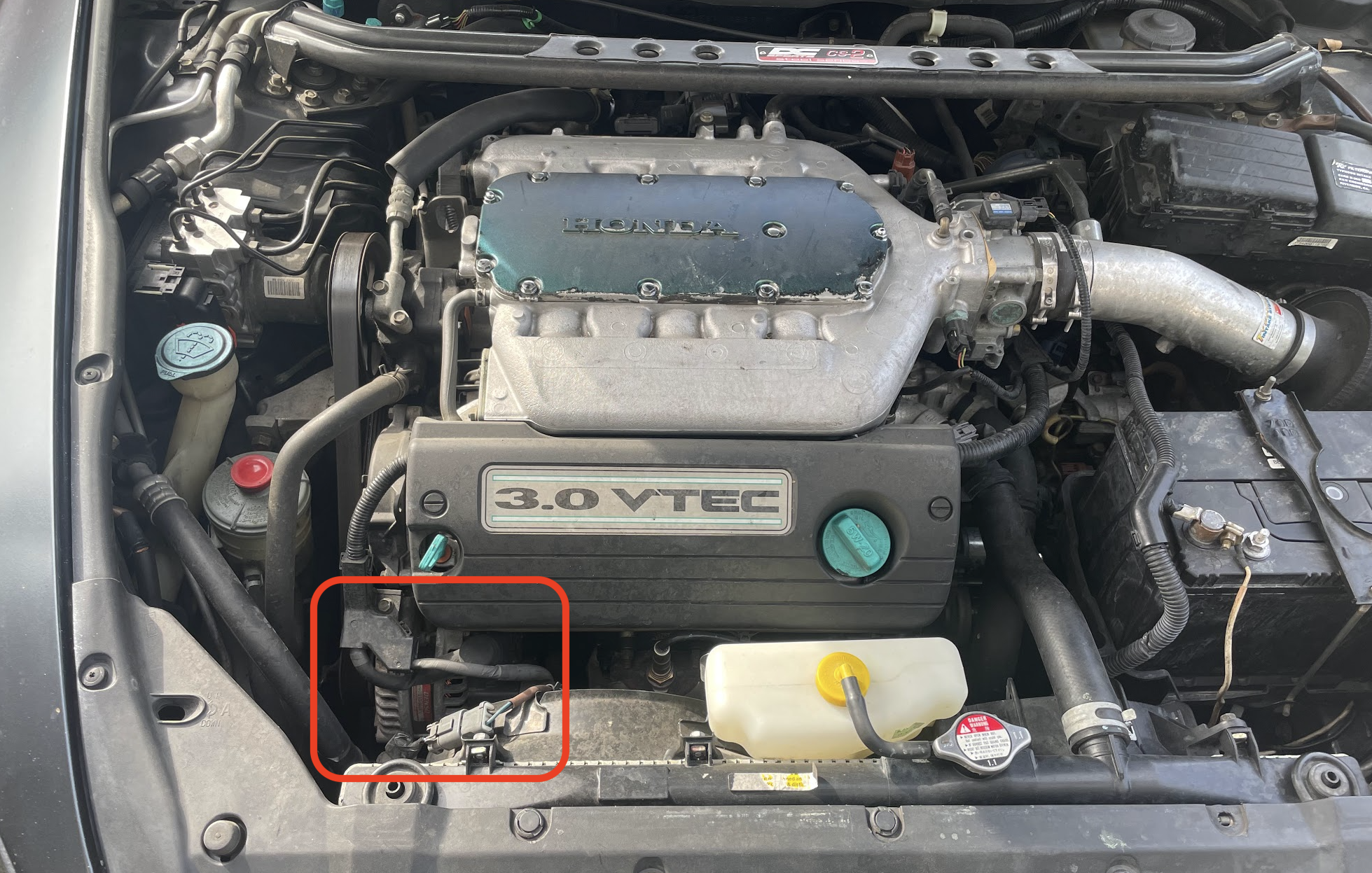 The alternator has a power cable and a harness plug connected to it. Disconnect the harness plug. It’s easiest to do this if you pull back the rubber boot and press the tab holding the harness on with a flat head screw driver. 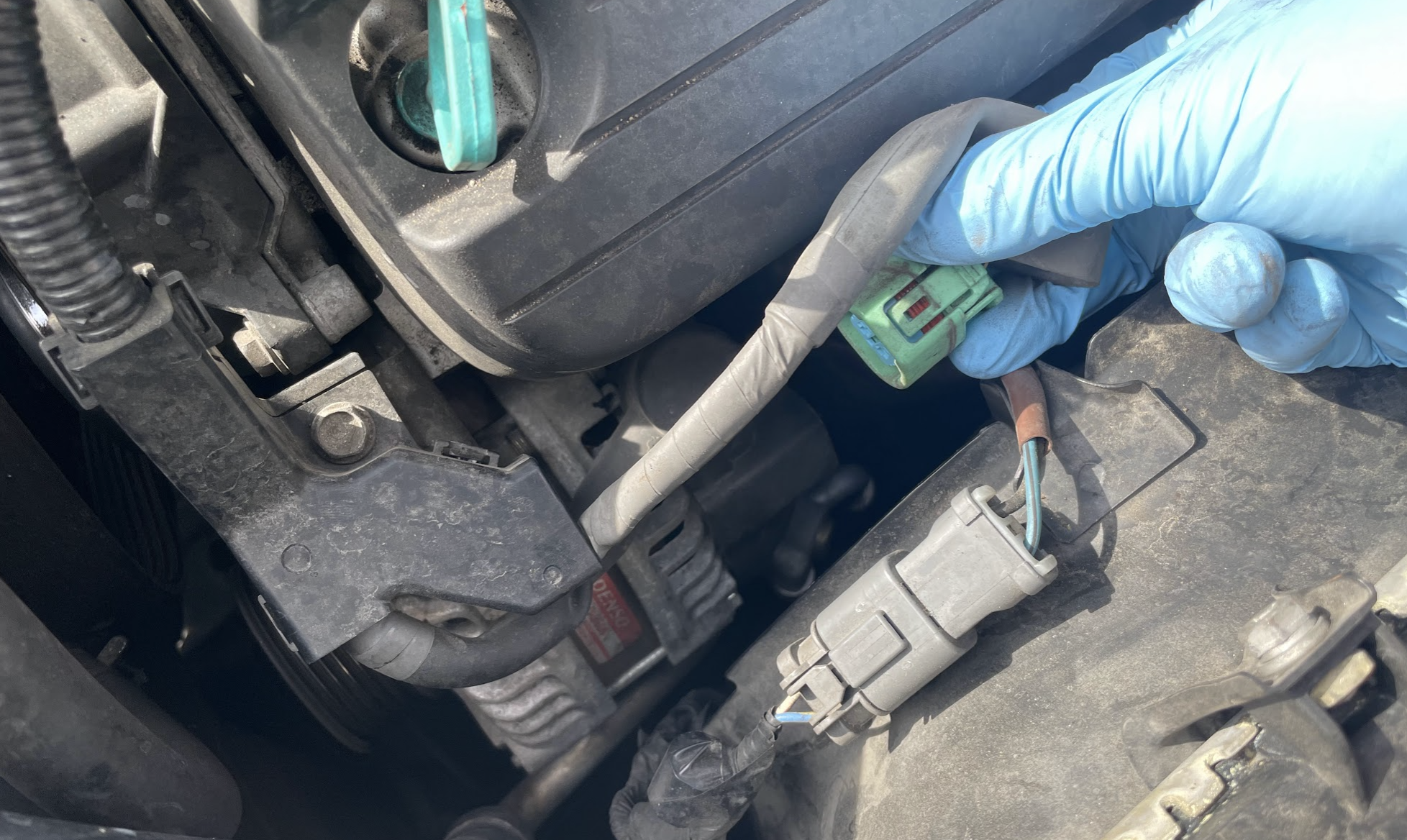 Next pull back the boot from the main power wire on top of the alternator. This will reveal either a 12mm or 13mm nut depending on whether this is the original OEM alternator or a replacement. 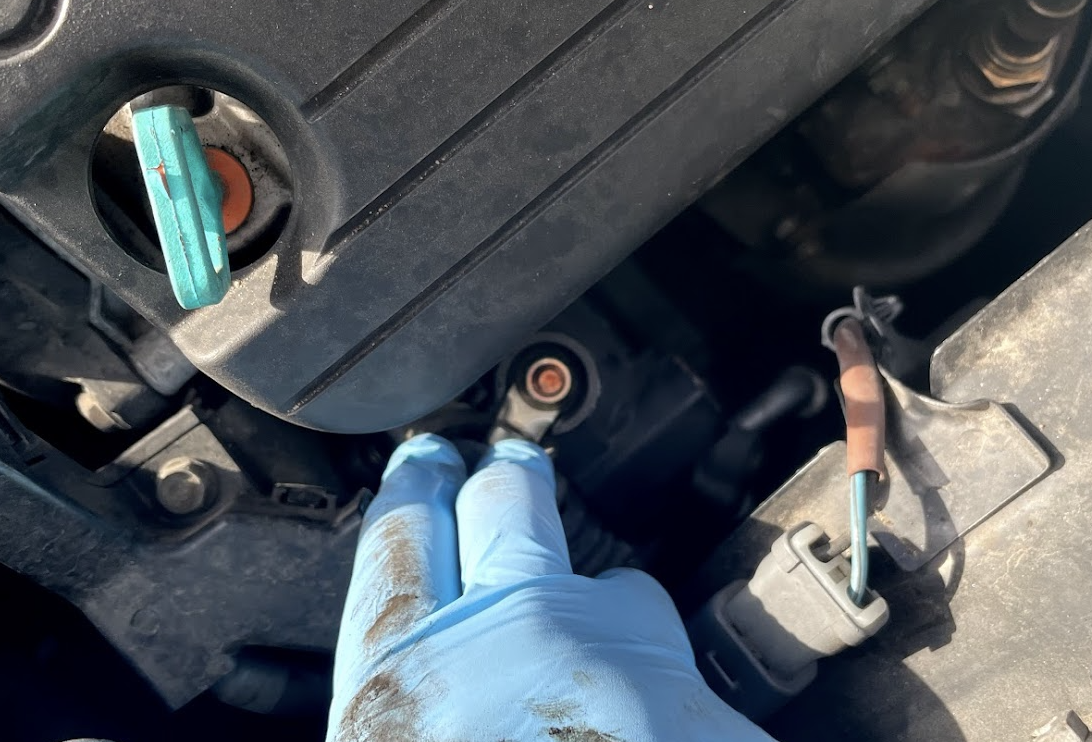 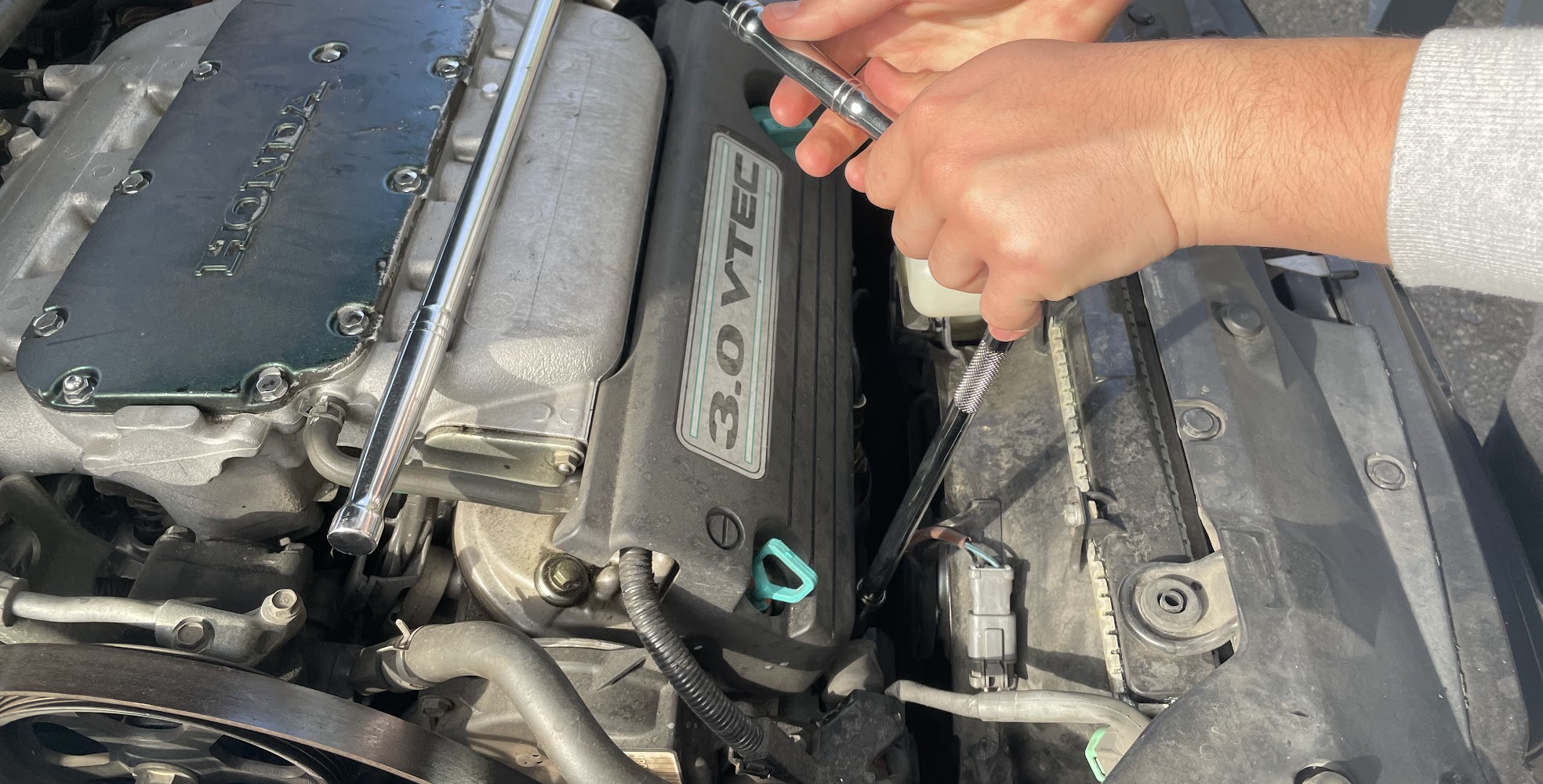 The next steps can be impeded by the brake fluid reservoir. It’s easy to find because of its red cap. Pull it out of the slot in the chassis so you can tuck it aside out of your way. You do not need to disconnect the brake fluid lines connected to it and spill brake fluid everywhere. 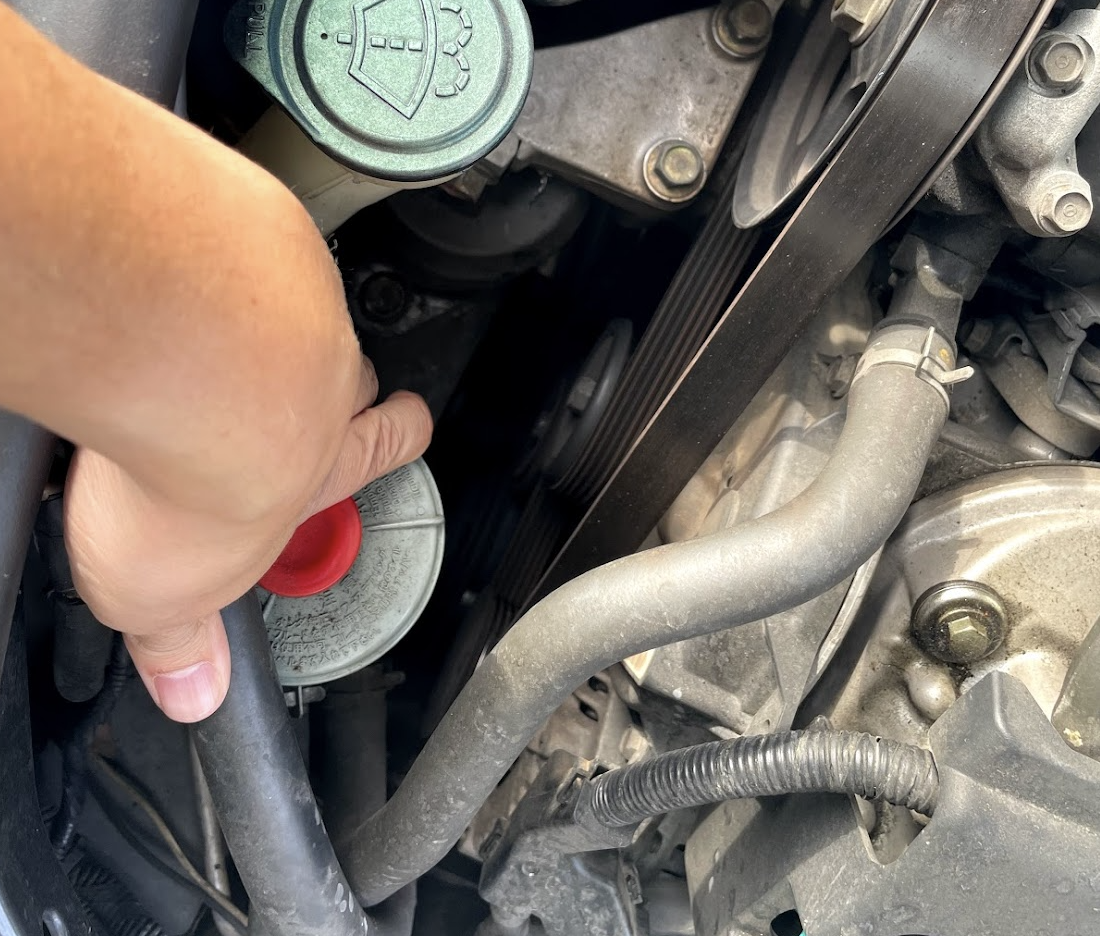 Next we need to take the belt off of the alternator. In order to do this we must release belt tension via the tensioner. Use this diagram to identify the tensioner pulley. It’s the higher up of the two smaller wheels. 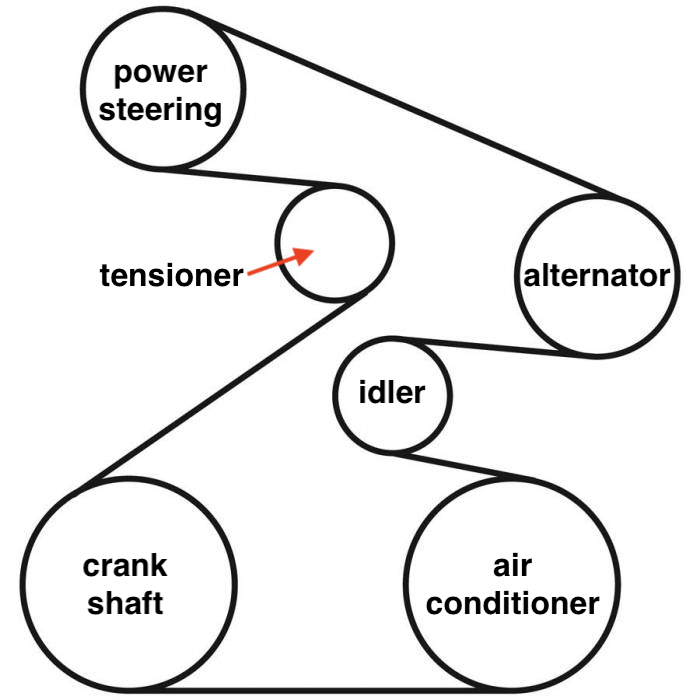 To release tension on the belt you we’ll place a 14mm socket on the tensioner puller nut and turn counter-clockwise. The nut won’t turn but the tensioner will shift toward the back of the car releasing tension from the belt. This requires some force and is best done with a breaker bar. If you don’t have one consider putting a jack handle on the end of your ratcheting wrench to give you more leverage. 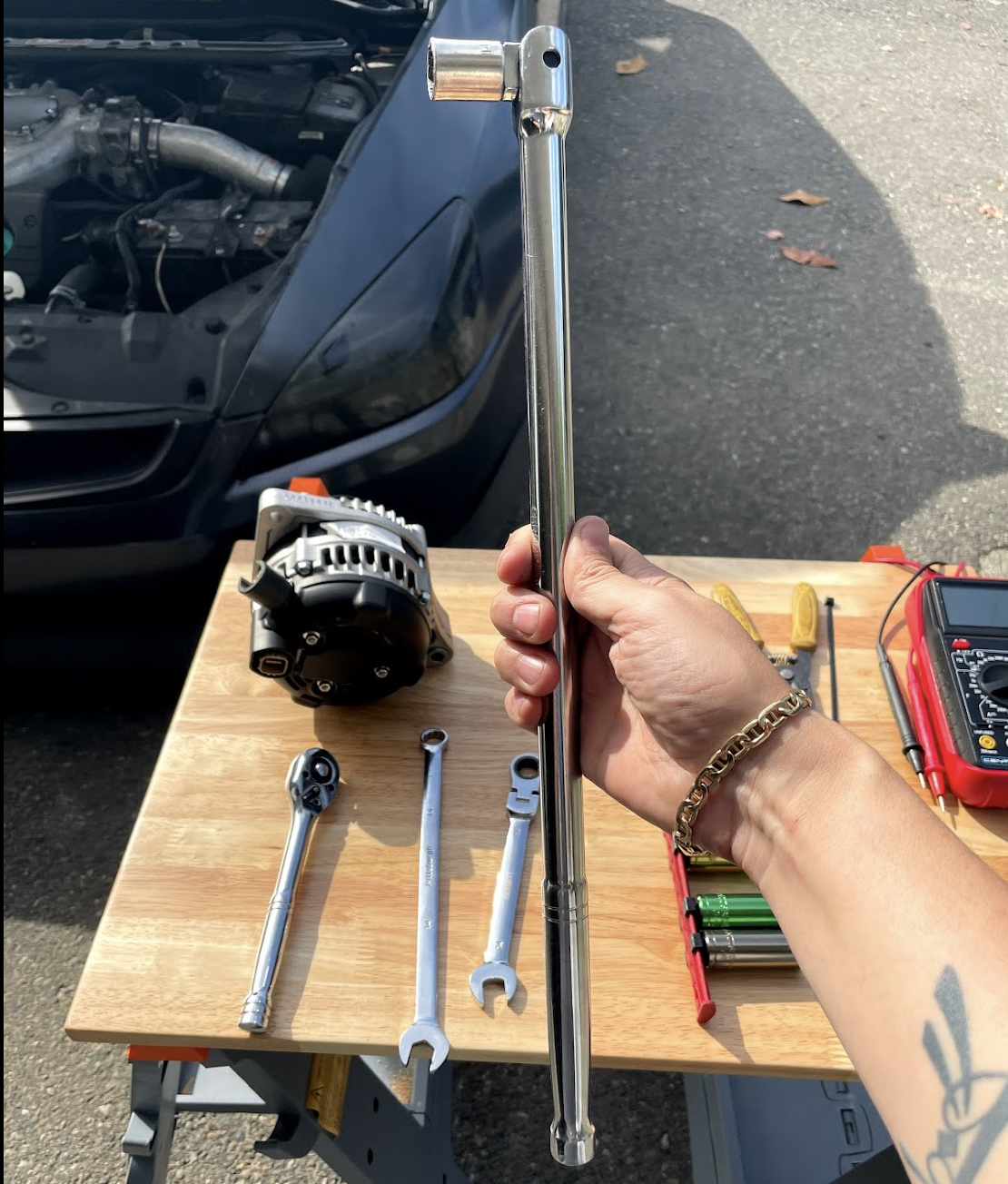 This step is best done with an extra set of hands. One of you pushes the breaker bar to hold the tensioner back while the other removes the belt from the alternator pulley. Take care not to remove the belt from other devices such as the crank or you may have to jack up the car and get underneath to reset it.

I find it worthwhile to remove this bracket holding this wiring harness to free up space to before I try to pull out the alternator. It is held on with a 12mm bolt. 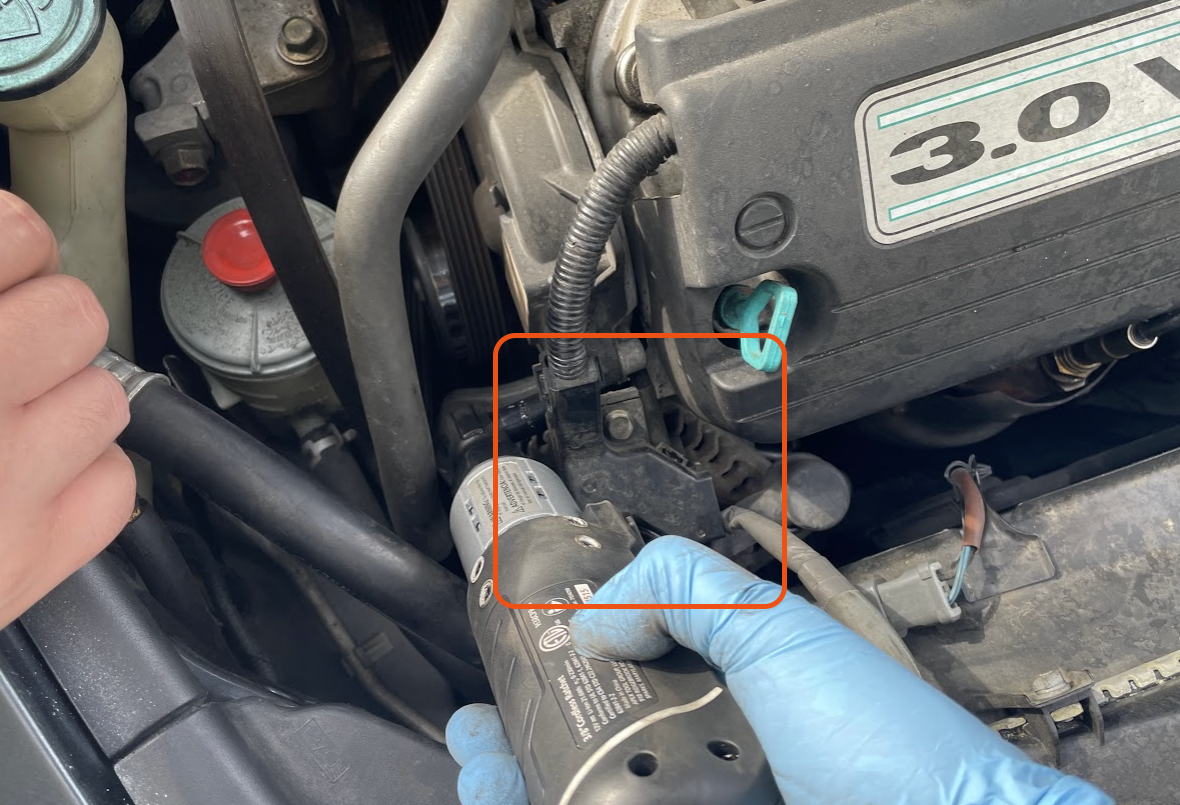 With the belt off and the harness of of your way. You can now remove the two bolts holding the alternator on to the engine. There is one at the top of the alternator and one at the bottom. Look at your new alternator to help you find the bolt locations on the old alternator. 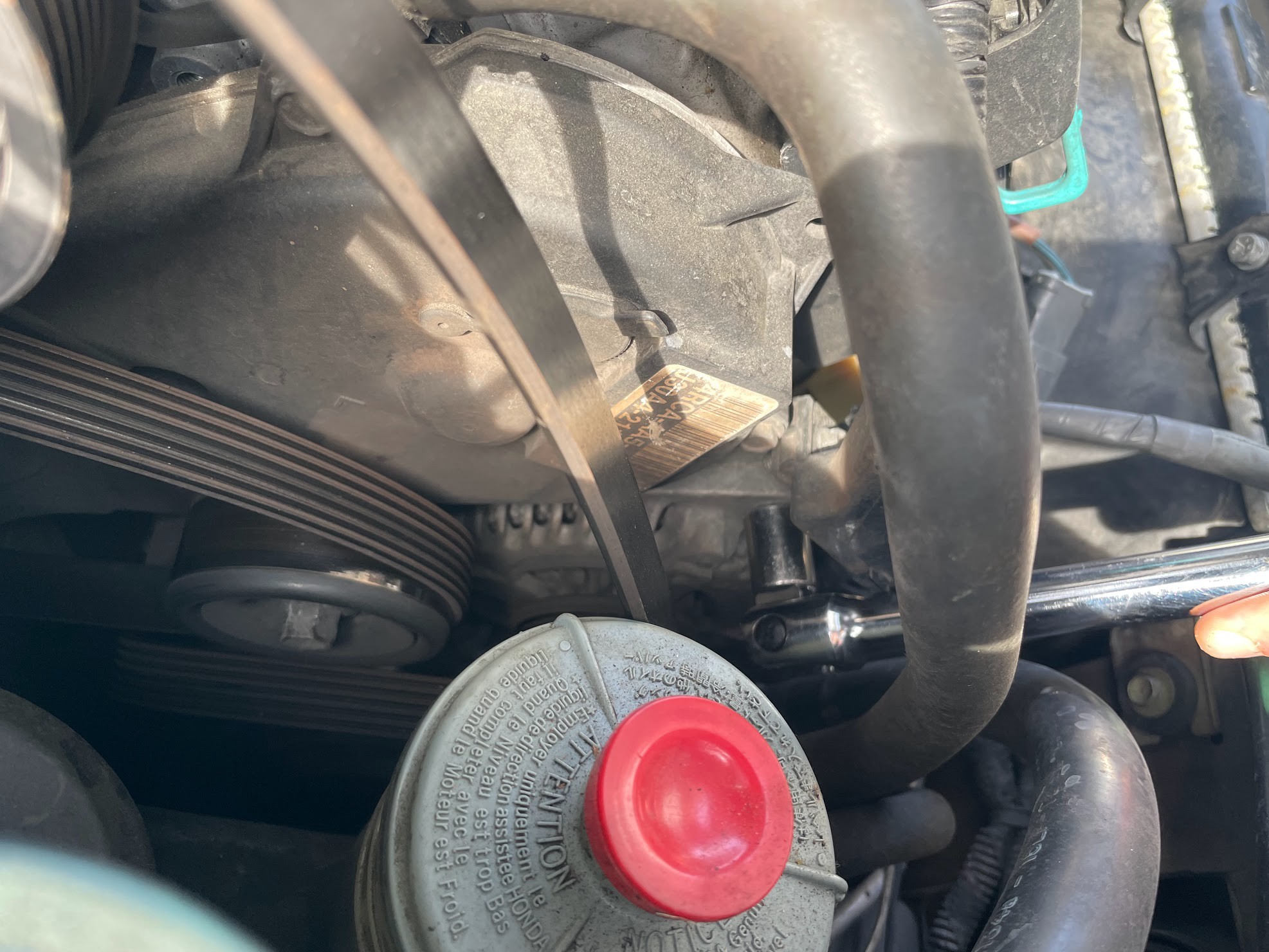 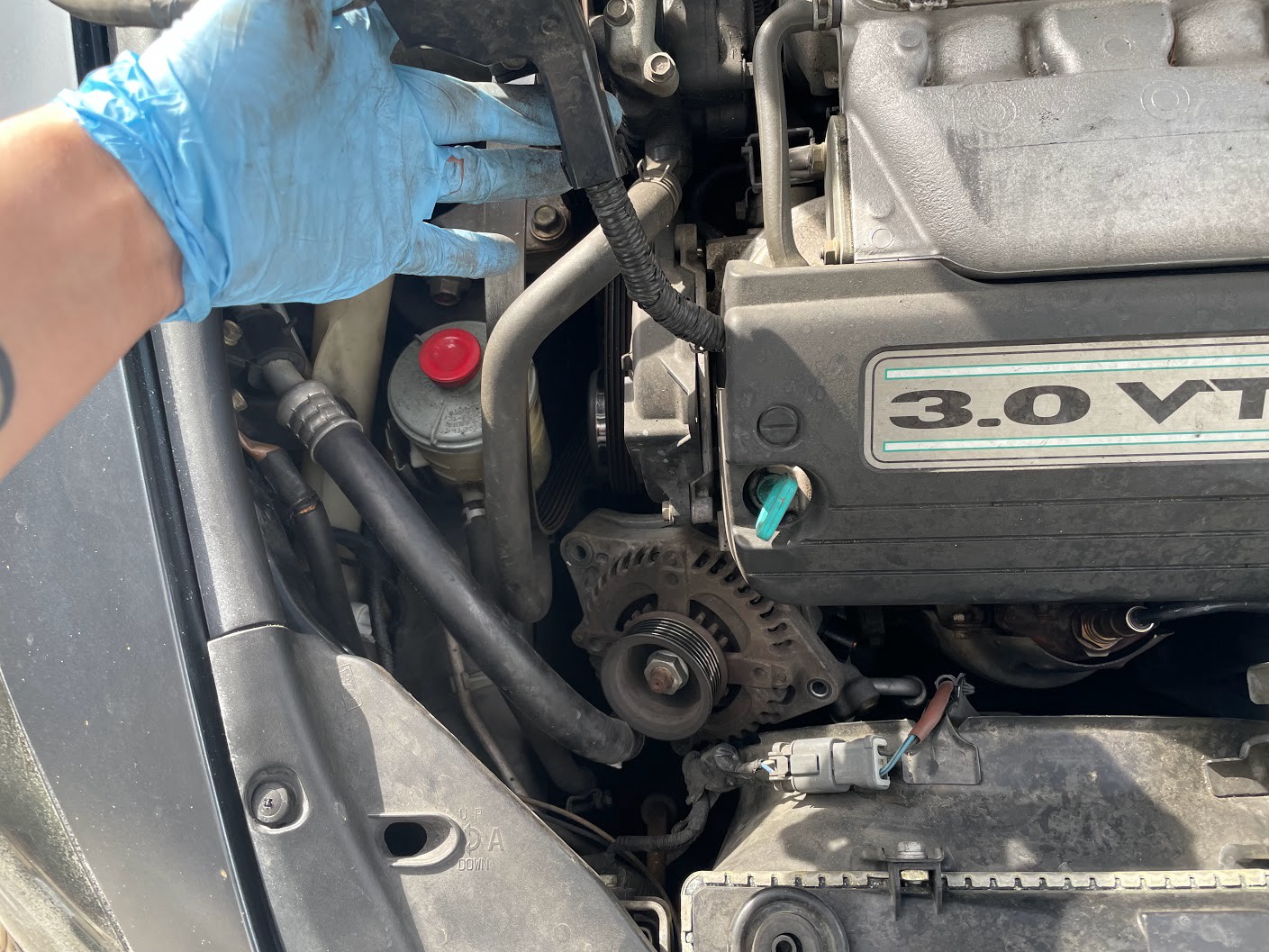 Now that you have the old alternator out it’s a good idea to compare it to your new alternator to make sure the pulley is the same size, the electrical connector is the same and the bolt locations are the same. If not you may have been sold the wrong replacement part. Assuming all is well you can do the opposite of all the steps you did so far!

Maneuver the new alternator down into the engine bay. This time gravity is working with you instead of against you. 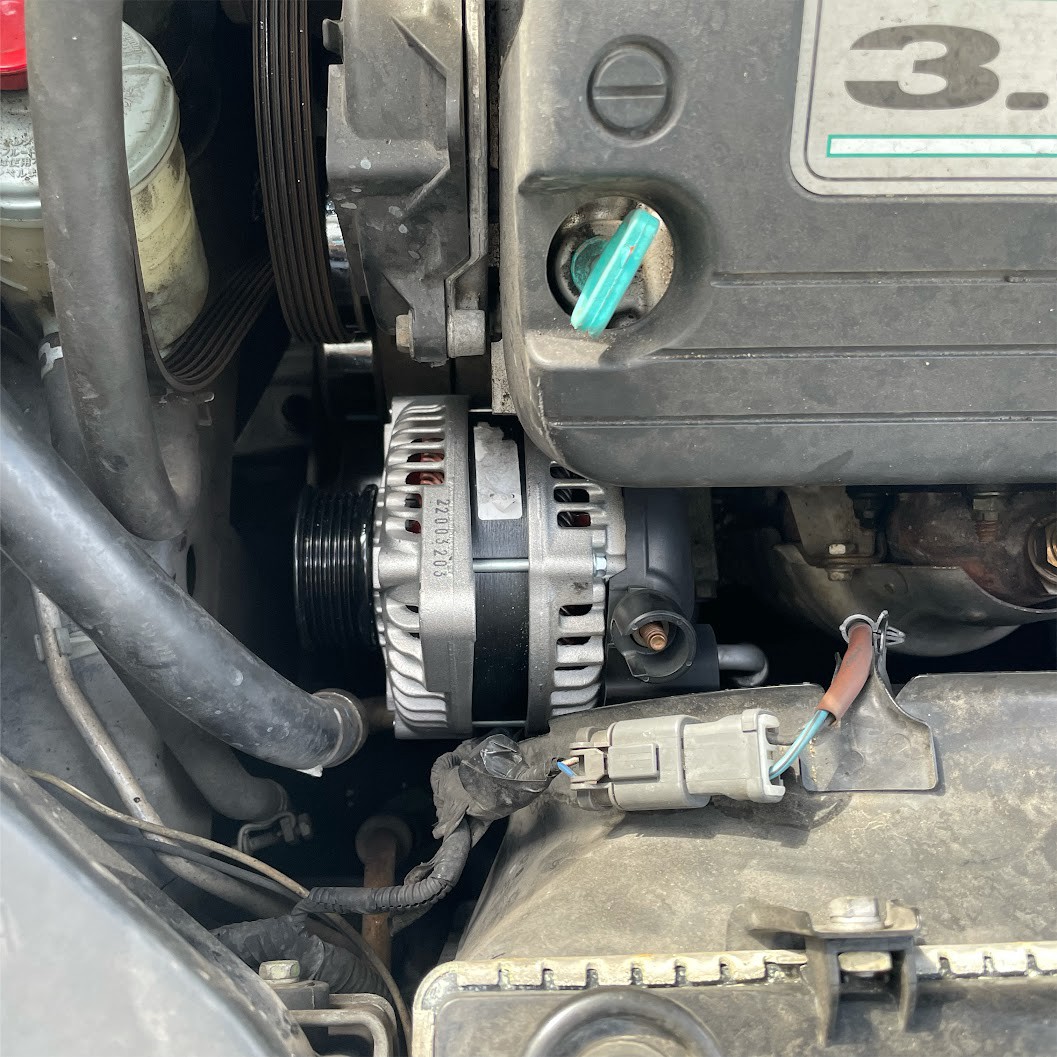 Replace the two bolts to secure it to the engine block. Then you can bolt on the power cable and plug the green electrical connector in. 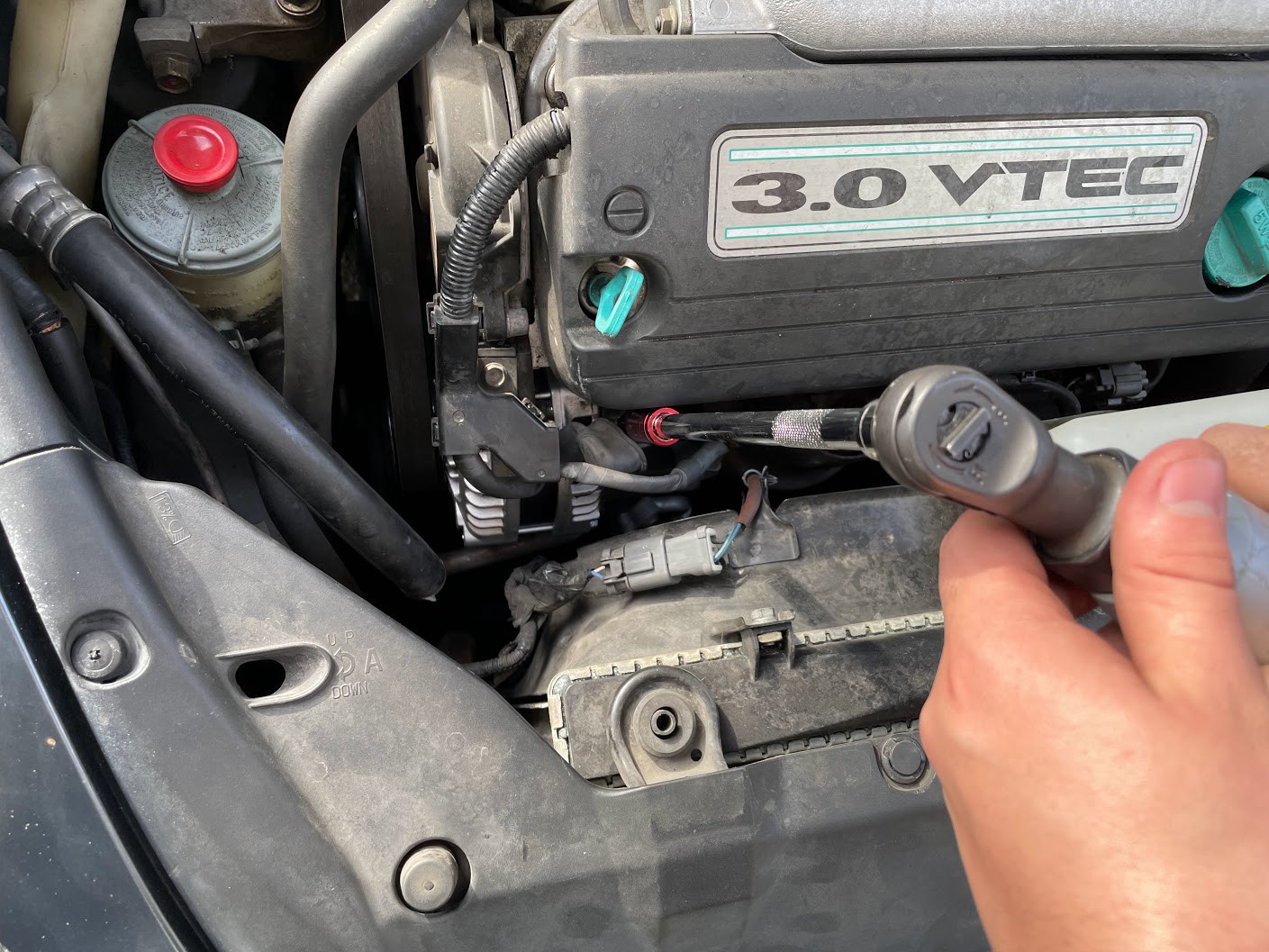 Re-attach the bracket holding the wiring harness and replace the belt. When replacing the belt you will need someone to be tensioning the tensioner again. Be sure that the belt is properly routed around all the accessory devices. Refer to the above diagram.

Double check that you’ve left no tools around the belt area re-connect the battery.

If you have a multimeter now is the time! Measure the DC voltage at the battery terminals. When the car is off a healthy battery should read 12–12.5 volts. Now start the car. If your new alternator is working correctly, the battery will now read above 14 volts! If you do not see a voltage increase when the car is running, double check your electrical connections to the new alternator.

If you made it this far I assume you found this guide useful. Check out my YouTube channel here for related content.